Oh St. Paddy’s Day…you have arrived. I do want to make a quick note to everyone out there that it is indeed supposed to be St. PaDDy’s Day with two Ds not two Ts as people tend to do. I decided to make a quick note on that because I just read something about there being a whole Internet site dedicated to correcting this atrocity. I’d agree though as Patty refers to a woman and quite frankly, St. Patrick was a man. Also the two Ds are acceptable because it comes from Padraig, a variant of Patrick. So please well-wish correctly with St. PADDY’S Day or St. Patrick’s Day. Just saying.

So anywho (yes I said anywho – that was intentional), I am lucky enough to say that I am indeed one-fourth Irish. Yay for the Denevan side. I had always been told that Denevan is indeed Irish but that it was long ago supposed to be Donovan. The rumor I remember hearing, but this may not actually be the case so please don’t quote me, is that the Os in the name were changed to Es, therefore making it Denevan, not Donovan. Go figure. I’m not real sure why the change – poor handwriting perhaps? Either way, Denevan, despite being quite Irish, can’t be found in Ireland. Again, go figure.

I love it though. I’m quite proud of my Hispanic heritage but I’m also quite proud of my Irish side too. I’m all about embracing culture and both have plenty. This is probably why I love whiskey and tequila! I can’t do beer though but that’s for another post. I also tend to blame my being 4’8″ on the Irish side. That’s just the leprechaun in me…so I say. It probably actually simply comes down to genetics but it’s more fun to say it’s because I’m part leprechaun. I’d say part hobbit but my feet aren’t big enough and thankfully not hairy enough for that business. Wooh…dodged a bullet there.

My dad’s side is most definitely Irish. Do you have any idea how many Patrick’s are in this family? Many but for now all you need to worry about is my dad and brother. Both are Patrick. They also both have quite Hispanic middle names. That’s how my family rolls – loving the mix of cultures, as it should be darn it. I don’t have as much background into my much older relatives on my grandpa’s side. That is something I’ll have to work on for sure. It would be neat to know more about how and when they came over and why.

So onto this St. Patrick person. There are lots of legends about him but from what I understand, the real story, or close to it, is after returning home from being kidnapped by Irish hooligans, he became a priest. He then returned to Ireland and allegedly converted thousands of Irish from their pagan ways to Christianity. St. Patrick’s Day is held in his memory of when he died. How to celebrate varies greatly from place to place but the one commonality – green. There’s always so much green but I love it! Green is a fabulous color and certainly is reflective of the Emerald Isle, as Ireland is usually referred to as.

I remember one such St. Patrick’s Day when I was participating in one of my spring break trips in college. We had arrived early and so we had a day to goof off and so we took the bridge and crossed over into Windsor, Ontario, Canada. It was easy then as it was all pre-9/11. Anyway, it was a fun day of wandering around Windsor but we also came across these funny little characters being as it was St. Patrick’s Day and all. 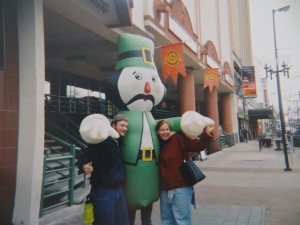 credit: J.Denevan (me); oh what fun to see these folks in inflatable St. Patrick’s Day suits

It was a pretty glum day but these two folks were having a lot of fun dancing around in these huge inflatable suits. Naturally, being as our group was a ton of fun, we had to have our fun with them. It was a good day. College was a great time for St. Patrick’s Day for me because it almost always was around spring break. Go figure.

Okay so a couple of final notes…literally. I decided to add in a bit of a special select-a-set given it’s that lucky day and all. The Irish love their music and dancing so it’s just perfect to have some songs to go along with this.

First – Tim O’Brien’s “Two Journeys” off the album of the same title. This song is talking about the trek the Irish made from Ireland to the U.S., escaping the hardships and famine, etc. This is truly one of the most beautiful songs not only in lyric but in Tim’s and Courtney Granger’s voices, but also the musicianship/instrumentation.

Second – coming off the Putumayo: Women of the World Celtic is Maire* Brennan (of Clannad), “Against the Wind.” I love this song because it has all those Irish elements and Maire’s voice is gorgeous. *I can’t find the right short cut to add in the appropriate accent for her name.

Third – to be honest, I’m not sure who performs this last one. It’s a mix of a few different traditional Irish jigs (Clare’s Jig, Swallowtail Jig and Tenpenny Bit). I couldn’t have a special Irish select-a-set and not have something a bit more traditional for you. Can you see the River Dancers now? *smiles* I wouldn’t listen to this all day as eventually I need some rock’n’roll in my life but this is wonderful. People may joke about the Irish being drunks but let me tell you, the Irish are so much more than “expert” drinkers – they have a lot of culture and certainly are musically inclined.

Happy St. Patrick’s Day everyone! May the luck of the Irish be with you today and always!

One response to “Happy St. Patrick’s Day! (Lucky to be Irish)”