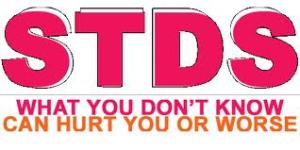 If you’ve ever, for some ridiculous reason, been curious enough to Google search sexually transmitted diseases, or a particular one like Gonorrhea, and then did the really unthinkable and looked up images,  you were possibly scarred for life. Those photos may have made you consider buying that chastity belt that “Mariam” used in “Robin Hood: Men in Tights,” something with a lock and key and couldn’t be penetrated. If you haven’t done a search, well, it can certainly be scary, trust me, I’ve tried it.

The crazy part is, that while those images are incredibly horrific and your retinas forever burned with images you wish you could unsee, eventually they do fade from memory. It’s easy to go back to forgetting about the nightmare experience and not think on it again. The problem with that is, it shouldn’t be forgotten. The biggest mistake to make is to shove those memories out of the way, into some dark corner never to be seen again. The moment it’s forgotten is the moment a person is put at risk again. It’s easy to get too relaxed, figure it “can’t happen to me” and bam! Wouldn’t you know it… it did just happen to you.

To me the scariest part about that is… you might not even know that you have it. There are symptoms associated with Gonorrhea but guess what… like many STDs, it’s possible not have any but that doesn’t mean you don’t have it. Part of the problem is, for instance, in women, when they are present the symptoms are so non-specific that it’s often mistaken for a vaginal or bladder infection. There can be signs of a urethral infection in men. I’ll leave you all to read more specifically into what happens there. It’s pretty icky. If you read about it, you’ll know what I mean.

There are some pretty serious consequences for not getting tested also. For both men and women, if left untreated, it can cause sterility. The infection can spread to the uterus and cause pelvic inflammatory disease. PID can be the cause of ectopic pregnancies – a pregnancy that occurs outside the uterus, such as in the fallopian tubes. Trust me ladies, this isn’t good and you really want to avoid PID. In men, Gonorrhea can be complicated by epididymitis.

Some fun facts to remember about this lovely disease:

• Gonorrhea is very common! The Centers for Disease Control and Prevention estimates approximately 820,000 people in the U.S. get new infections. It’s estimated that less than half of those cases are detected and reported.

• CDC estimates that 570,000 of those estimated cases are among young people age 15-24. If this isn’t a case for educating our young people, I don’t know what is (granted education doesn’t fully prevent but it may help).

• By region, the South still had the highest rate of the disease in 2011, followed by the Northeast, then the Mid-West and the West. The Northeast had the biggest increase in reports between 2010 and 2011.

• Gonorrhea likes warm, moist places… yes folks this includes eyes, mouth, throat, and anus. I read an article a couple of years ago about the increase in young girls who were getting it in their throats… probably thought it was safe to go with oral sex… not so much.

The CDC had plenty more interesting things to say about it, but I think you get the point. Yes, those statistics are two years old and older now but it’s recent enough to take notice. I realized I may have taken a mildly joking manner with some of this, but the truth is, it’s not a laughing matter.

Yes, Gonorrhea can be cured, but that doesn’t mean it’s not serious. As stated, it can have really serious impacts. I wanted to post this because I still find that so many people don’t really understand just how serious it is for everyone. That article, about the young girls, as far as I’m concerned that shows that people still don’t even know all the facts about STDs, where they can be, how they can be transmitted, etc. The list goes on and on and that’s scary.

One thing I saw on the CDC website also, is that while there still remains a cure for Gonorrhea in this country, there has been a drug resistant strain detected. It hasn’t been detected here in the U.S., the drugs still work, etc., etc., but why take the risk? Why make the assumption that you won’t be the one “lucky” person to be the Guinea Pig and have the drug resistant strain. Do you want to risk fertility? permanent pain? or other issues? Do you want to risk being a person to pass it along to someone else?

I can’t help but recommend that any person sexually active get tested (okay I’d like to think married folks don’t have to but with open marriages and infidelity happening – get tested!). Please wear condoms because the birth control pill WON’T, I repeat WILL NOT prevent getting or transmitting a STD.

So here is it… the CDC site(s) I went to in case you want to get even more information. The CDC also lists all of their references if you want to check those out also.

If you don’t like or agree with the CDC, please take some time to educate yourself with other reliable sources. More reliable sources typically, but not always, include .gov or .org in their website address. There is new information coming out about STDs, it’s worth taking a look periodically to find out all that you don’t know. And don’t fret, there’s a few more of these coming since this month’s theme is all about getting educated.

One response to “An Education in STDS: Gonorrhea”